PH2 8QQ. Signposted from the A912 0n the southern edge of Perth.

PH2 8QQ. Signposted from the A912 0n the southern edge of Perth. 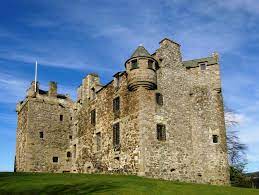 One of Scotland’s best-preserved 16th-century tower houses. The Wemyss family, who were traditionally loyal to the Stuarts had their main home at Wemyss Castle in Fife. However, Lord Elcho, the heir to the 5th Earl of Wemyss, almost certainly lived at Elcho Castle for part of his upbringing and Elcho was already closely associated with James VIII and III before the '45; James admitted him to the Royal Company of Archers in 1741 and appointed him Colonel of Dragoons in 1744. Elcho commanded Prince Charles Edward’s Life Guards during the '45. He would recognise the castle today. Now in the care of Historic Environment Scotland.